What do pig races, first aid, and cabin beds all have in common? They are all ways in which some of this years Local Heroes have shown their support for the RFDS.

This year there were many well deserving nominees, making choosing just nine local heroes a challenging task. Local government representatives, friends, family, RFDS staff and health staff were all in attendance to applaud and show their appreciation of those who go above and beyond to support the RFDS.

“It is heart-warming to have received Local Hero nominations from around the state, ranging from outback pubs developing innovative and fun ways to help raise funds for the RFDS, to workers on remote cattle properties who have jumped into action in an emergency, to caravan park operators who offer a bed to rest for our pilots.

“On behalf of all of us at the RFDS here in Queensland we would like to congratulate and thank all Local Hero nominees across Queensland who work behind the scenes to support the work of the Flying Doctor teams.”
Ergon Energy Retail Executive General Manager Cheryl Hopkins said the organisation was proud to be in their 18th year of supporting the Royal Flying Doctor Service Queensland and the RFDS Local Hero Awards.
“Our communities keep these towns alive and underpinning their survival are essential services and we couldn’t be without the RFDS,” Cheryl said. “They are an iconic service and have helped so many Queenslanders.

“Ergon Energy Retail remains committed as a key supporter of the RFDS and join the RFDS in acknowledging these unsung heroes in our community who’ve gone above and beyond to make a difference”. 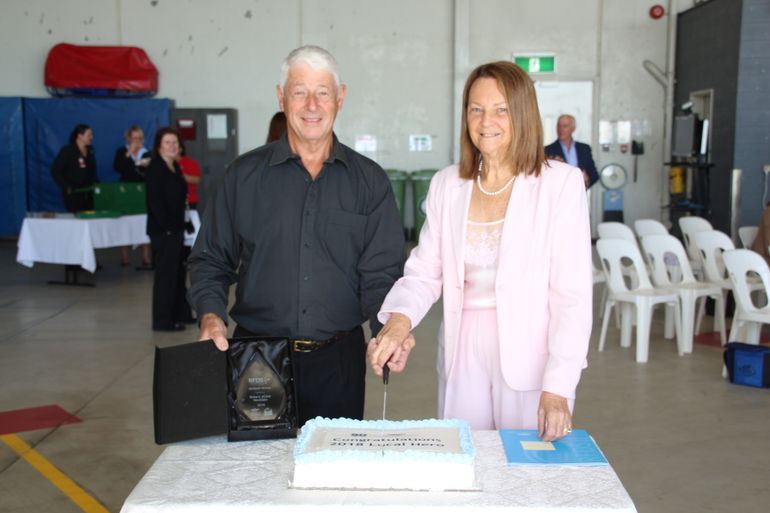 Distance means nothing when you’ve got thousands of sausages to sizzle. Or so the dedicated members of Brisbane’s Rotary eClub NextGen believe.

This group of Rotary Club members drive to the Birdsville Races each year, but they’re lucky to even see a horse. They spend most of their time manning a food tent, spinning snags, grilling onions and slicing tomatoes to feed the hordes of attendees at the iconic event. All profits from their efforts are donated to the Royal Flying Doctor Service.
The sheer distance travelled from Brisbane to Birdsville makes bringing fresh food to the iconic event a logistical challenge, but the team are seasoned professionals. The way they pack their mobile cold room is a work of art as they prepare for the 3,000km round trip each year. 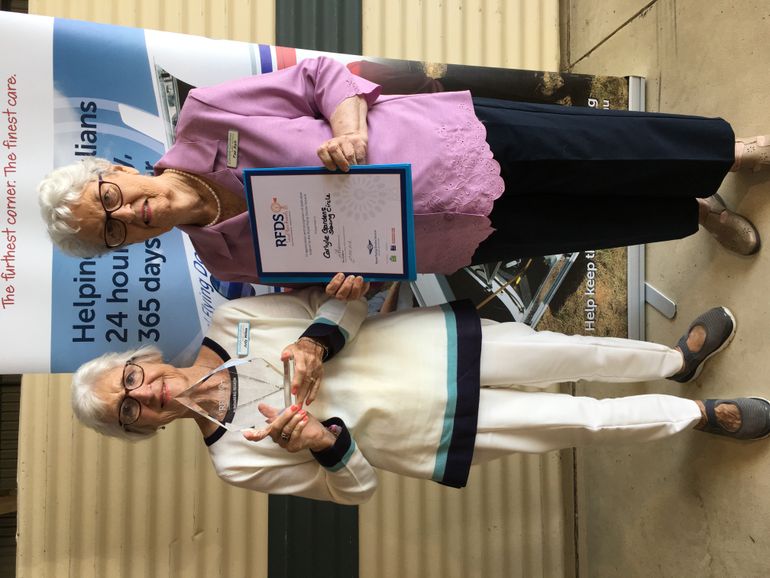 The Carlyle Gardens Sewing Circle have that moral fabric that keeps the RFDS stitched together.

Supporters of the RFDS in Bundaberg for many years, the group fundraises in a unique way, by doing clothing alterations & mending for the residents of Carlyle Gardens Retirement Community for a donation to the RFDS.  They also have a tin on the community bar for residents to make donations.

They are always looking for ways to raise funds for the service and are great ambassadors. The group is also currently working on some “peanut” pillows for use in RFDS aircraft. 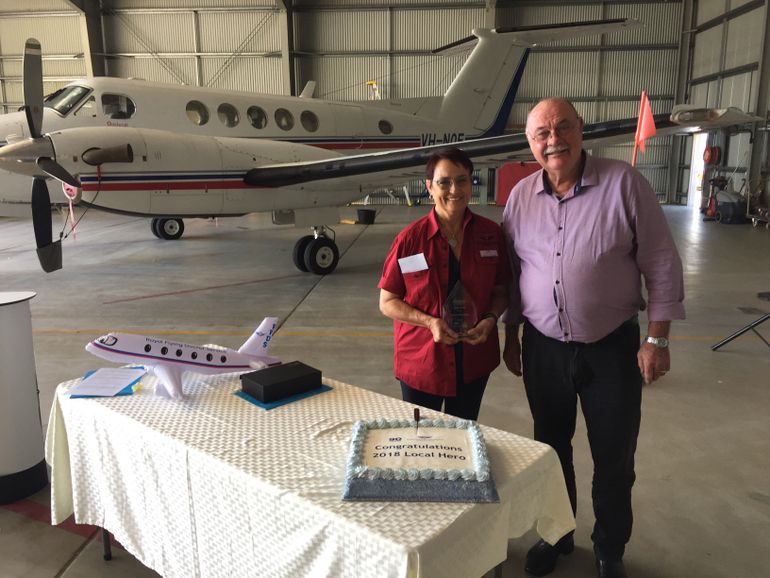 Just over six years ago, the RFDS Near and Far Volunteer Auxiliary was on the brink of closing down. It would need a strong personality to bring it back, and that’s exactly what it got in Denise McGucken.

Denise is a real people person, who takes a lot of joy in bringing all the members of the Near and Far Auxiliary together for fundraising events all across Far North Queensland.
Denise spent three years as president, two and a half years as shared treasurer and even jumped in as secretary when needed, without blinking an eye.
Now she still acts as a sort of mentor to the now president, Brenda Agius. Her dedication to the RFDS and the Auxiliary is second to none. 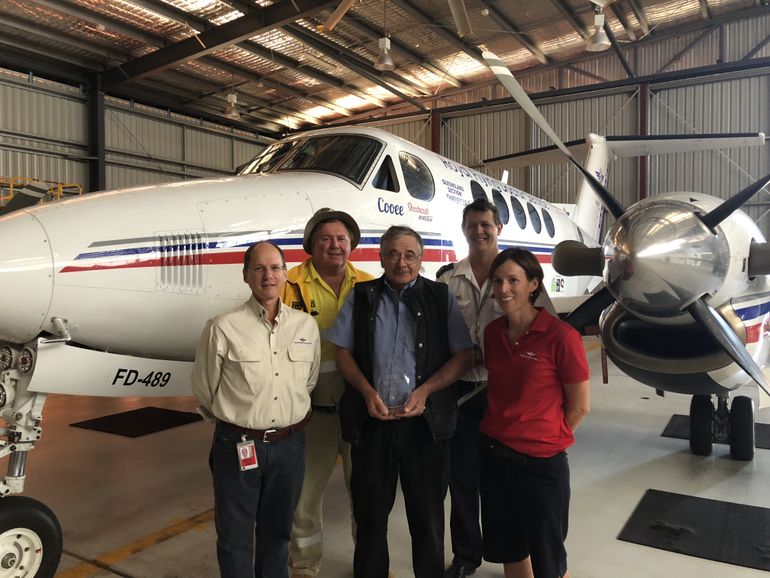 Scott Shorten could be considered the backbone of the Yowah community. From helping the RFDS for many years, to leading the Yowah SES, the whole community would call Scott if they were ever in medical trouble.

He is always there helping with the Flying Doctor clinics and when an emergency evacuation is needed. Scott never panics in stressful situations and he makes sure no one ever loses their cool in pressing circumstances.
He has organised many fundraisers for the RFDS, along with multiple other organisations that are critical to the care and wellbeing of the community of Yowah. Scott would, on many occasions, fire up the barbeque and cook up some food that he had saved for the pilots when they used to come out to the Yowah Airstrip for night landings. 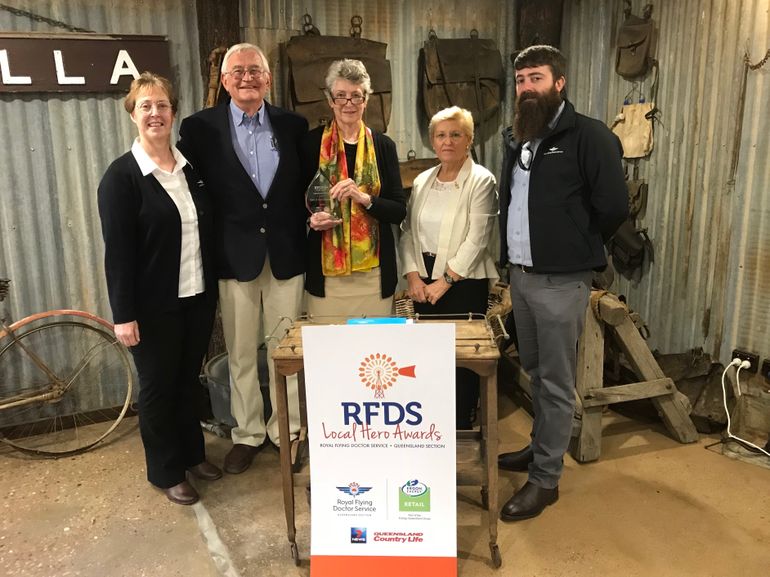 After deciding to jump in and buy an outback pub, Chris and Gerry Gimbett have taken on so much more than simply pouring cold beers from behind the bar at the Yaraka Pub. They have become part of the community, and part of the RFDS family.
They pick up the RFDS clinic crew from the airport once a fortnight and drive them to the local town clinic.
They have also assisted in many emergencies, including providing first-aid to the local police officer when they found him unconscious on the floor of his living room after a bout of the flu caused his to collapse and hit his head in the living room of his home.
Gerry also runs sunset tours to a local look-out, charging tourists a donation to the RFDS. Great supporters of the RFDS they also provide a friendly location for locals to meet and connect. 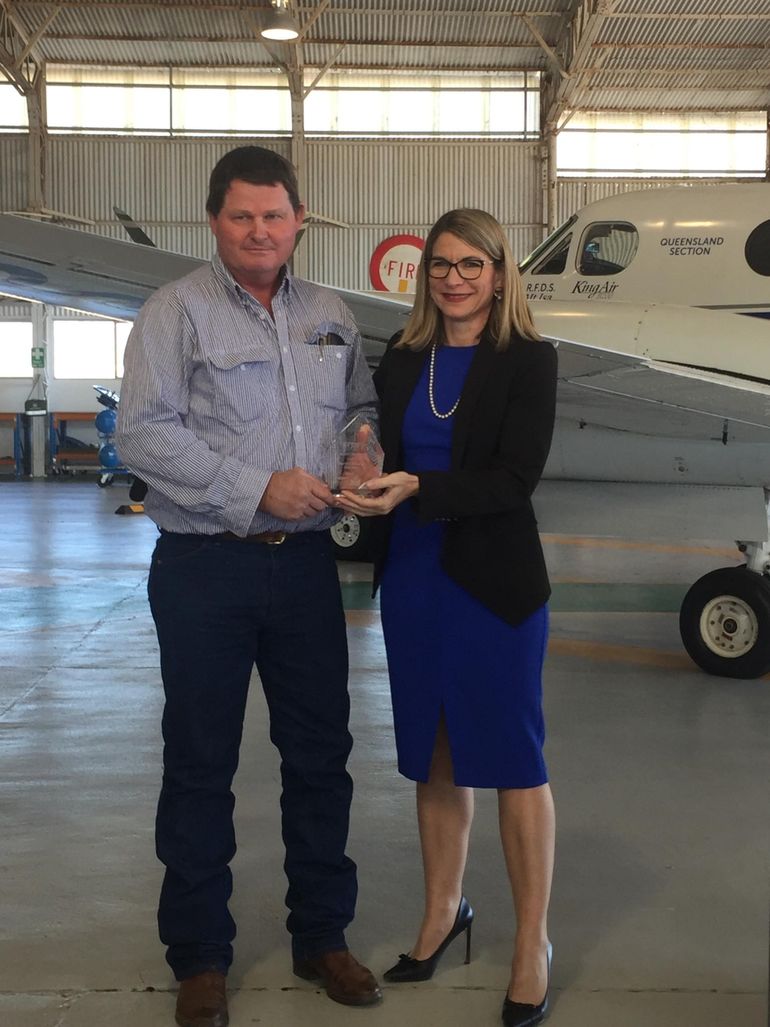 Barkly Downs Station is a 10,000 km2 property between Mount Isa and the Northern Territory Border.
They maintain an RFDS Medical Chest and the first aid training to use it, along with several RFDS-approved airstrips.
The Barkly Downs crew have been long-time practical supporters of RFDS, assisting in providing their airstrip and crew after hours every year for night training exercises and participating in RFDS promotional work, including videos and photoshoots.
Their proactive work paid off when a worker on Barkly Downs was seriously injured in a remote part of the property last year. The managers and team provided excellent on-site first-aid in consultation with the on-call RFDS doctor.
They flew the injured worker via helicopter to the homestead where they met the RFDS aircraft for a rapid transfer to initial treatment at Mount Isa and then a further RFDS flight direct to Brisbane for specialist care.
The teamwork, foresight and care that the Managers and crew applied in this case was directly responsible for the positive outcome and recovery for this patient. 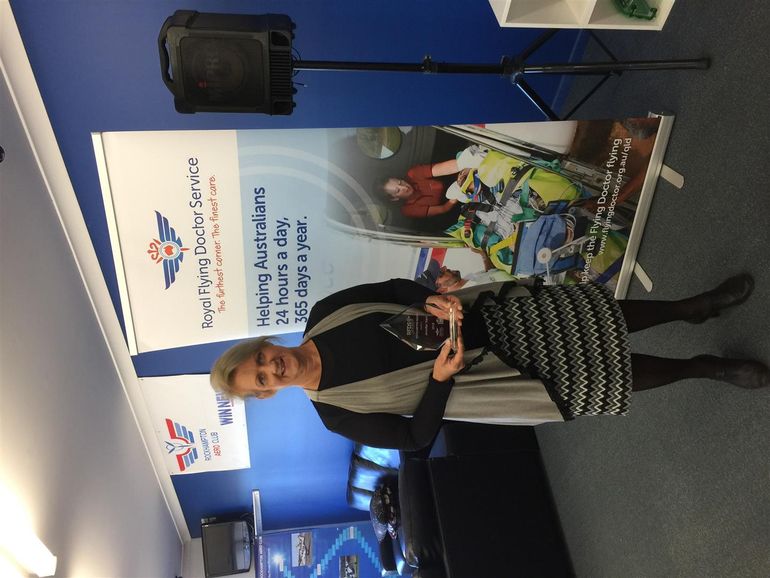 Jenny Hart is the wife of RFDS pilot Lindsay Hart and supports the RFDS by creating craft items to sell at the local markets.
Dedicating many hours to the cause, Jenny has personally raised more than $20,000 for the Flying Doctor.
She is also an active member of the Rockhampton Auxiliary and regularly volunteers at events that support the RFDS.
As if her husband Lindsay isn’t already working enough with the RFDS as a pilot, you can also often find him being dragged to community events by his truly selfless wife to lend a hand in her efforts. 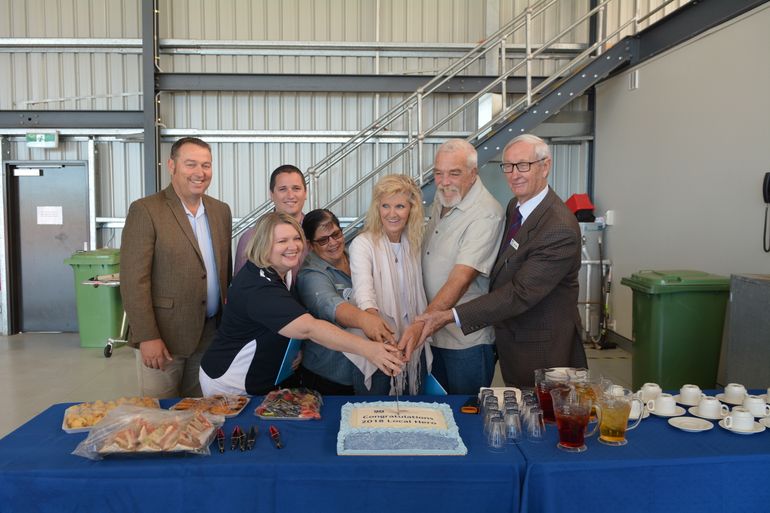 Each November, for the past 13 years, the Nindigully Pig Races result in the population of Nindigully exploding from 10 people to more than 500 people for the weekend.
Steve and Debbie Burns, publicans, introduced the Pig Races to their pub and the event has been a huge drawcard for its many followers who return year after year.
They promote, organise and obtain sponsorship for this hugely popular event, along with raffle prizes to add to the fundraising effort. In 2017 the Pig Races brought in over $30,000, which was donated in its entirety to RFDS.
On the bar at the pub is a bullock yoke and Condamine bell made by a local artisan, which travellers can ring for a donation to the RFDS. While they have had to move to Hervey Bay for personal reasons they are still strong supporters of the Pig Races and in 2016 surprised patrons by holding their wedding at the pub on race morning. 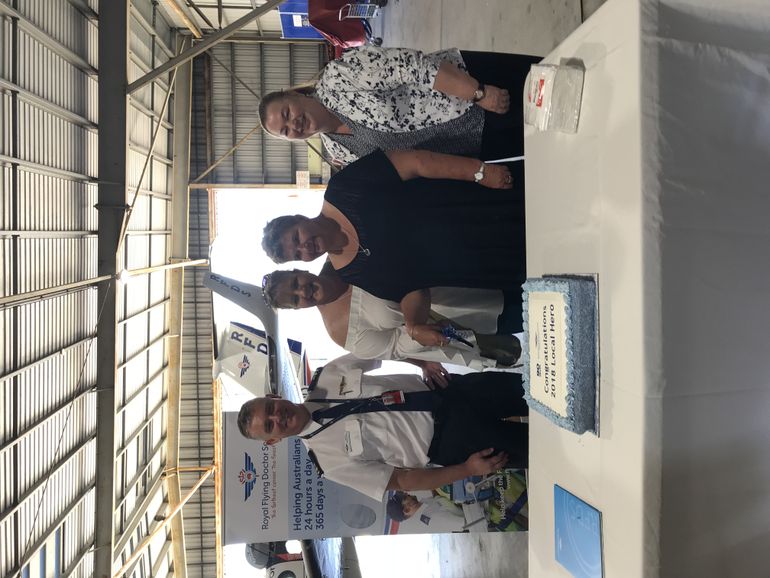 When RFDS clinical staff travel to Pentland for their 4-weekly Clinic, the Cairns Pilot requires a place to rest during the day.