Eight new Royal Flying Doctor Service (Queensland Section) (RFDS) pilots, five of whom were displaced from commercial airlines during the pandemic, have now completed simulator training on the Sunshine Coast.

While training duration was dependent on previous experience and qualifications, the vast differences between piloting a commercial airliner and a King Air, meant that all pilots had to complete a range of proficiencies and ground school subjects prior to commencing work with the Flying Doctor.

RFDS Head of Flying Operations Shane Lawrey said two of the pilots had previously worked with the Service, which was a considerable advantage.

“The King Air aircraft flown by the RFDS in Queensland are high performance turbo prop aircraft operated by a single pilot. This can be a very demanding environment when combined with the type of operation performed by the Service,” he said.

“It is also markedly different from the two-crew environment provided by a commercial airliner, flying to the same airports day in and day out. 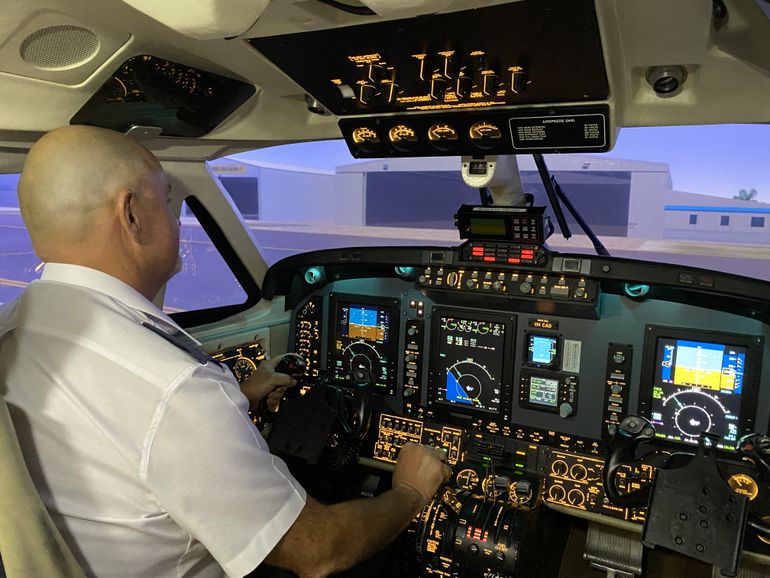 This is why the simulator here at Flight Options on the Sunshine Coast is so vital to the training of all RFDS pilots.”

Mr Lawrey said the simulator had a selection of airport models that exactly matched aerodromes frequented by the RFDS.

“The digital terrain model in the simulator’s database can be used to represent most airports for RFDS training purposes,” he said.

“Simulation provides a non-jeopardy environment in which a pilot can hone their skills. The level of simulation allows the pilot to manage emergencies that would not be safe to carry out in the aircraft.

“Since we have moved from the aircraft to simulator-based training, we’ve received a lot of feedback regarding how well the simulator has prepared our pilots for various scenarios in the field.”

Mr Lawrey said a record number of applications, over 240, had been received for the new roles, largely due to the displacement of so many commercial pilots during the pandemic.

“The RFDS employs some of the world’s most highly trained and skilled aviation staff and our team of 75 pilots operate a fleet of 20 aeromedical aircraft between nine bases across the state,” he said.

“This year, in particular, healthcare services across the country have been stretched greater than they have been for a very long time. During the pandemic the RFDS has remained fully operational, transporting more than 1,700 confirmed or suspected COVID-19 patients across the country, including 40 in Queensland.

“Without an incredibly skilled workforce, we simply would not be able to carry out the work we do, and this simulator plays a key role in ensuring we can continue to deliver world-class aeromedical services across the state.”