For a pregnant, first time mother moving to remote north west Queensland, the importance of the Royal Flying Doctor Service (Queensland Section) (RFDS) could not have been more evident for Ebony Robertson.

Ebony made the move to Burketown with her husband Joe after he accepted a job as a charter pilot. His long-term goal was to acquire enough flying hours to one day fly for the RFDS himself.

Having both grown up in areas of regional Queensland with ready access to hospital and health care services if required, they never truly understood just how important the RFDS was to people living in remote areas.

“I had no idea of the full extent of services the RFDS delivered. I just assumed they flew to properties to do retrievals with cowboys who'd fallen off their horse, basically,” Ebony said.

Ebony was 25 weeks pregnant when she arrived in Burketown, and her unborn child, Ollie, had been previously diagnosed with transposition of the great arteries (TGA) as well as Atrial Septal Defect (ASD). TGA is a serious but rare heart defect, in which the two main arteries leaving the heart are reversed, basically creating a shortage of oxygenated blood flowing from the heart to the rest of the body. ASD is caused by a hole in the heart between the heart’s upper chambers.

The RFDS provides primary health care services to more than 41,000 people in 109 locations across Queensland. As part of the regular GP clinics, the RFDS provides a comprehensive child and maternal health service with midwives and child and family health nurses working alongside RFDS medical officers.

“It was reassuring to know that we had really good care each week coming to Burketown with the RFDS,” Ebony said. “It put our mind at ease knowing we were going to be looked after and not be left in the lurch out in the middle of nowhere.”

At 30 weeks, Ebony and Joe relocated to Brisbane under guidance from doctors to ensure specialist care was available to Ollie as soon as he was born.

Following a successful birth, Ollie was still not out of the woods, undergoing open heart surgery only 13 days after he was born. Fortunately, this procedure was successful and after some weeks under observation due to other medical issues which arose after the surgery, Ollie was able to return to his home in Burketown with his parents where his ongoing medical treatment would be carried out by RFDS doctors and nurses, including Julie, at the local clinic.

“It's so important and amazing that they provide this service to a small town such as ours in Burketown,” Ebony said. “The service is incredible and the staff are lovely. Now I can’t imagine living in a place like this without the RFDS.

“It feels like they're your mates. You walk in and they make you feel welcome. Being up there in Burketown, you can feel very isolated, particularly as a first-time mum. But now we look forward to going and seeing the RFDS nurses once a fortnight.

“It's just as much a social activity as a healthcare activity. It gets you out of the house and they treat you like you're part of the family.”

However, Ollie’s journey with the RFDS was not over yet. 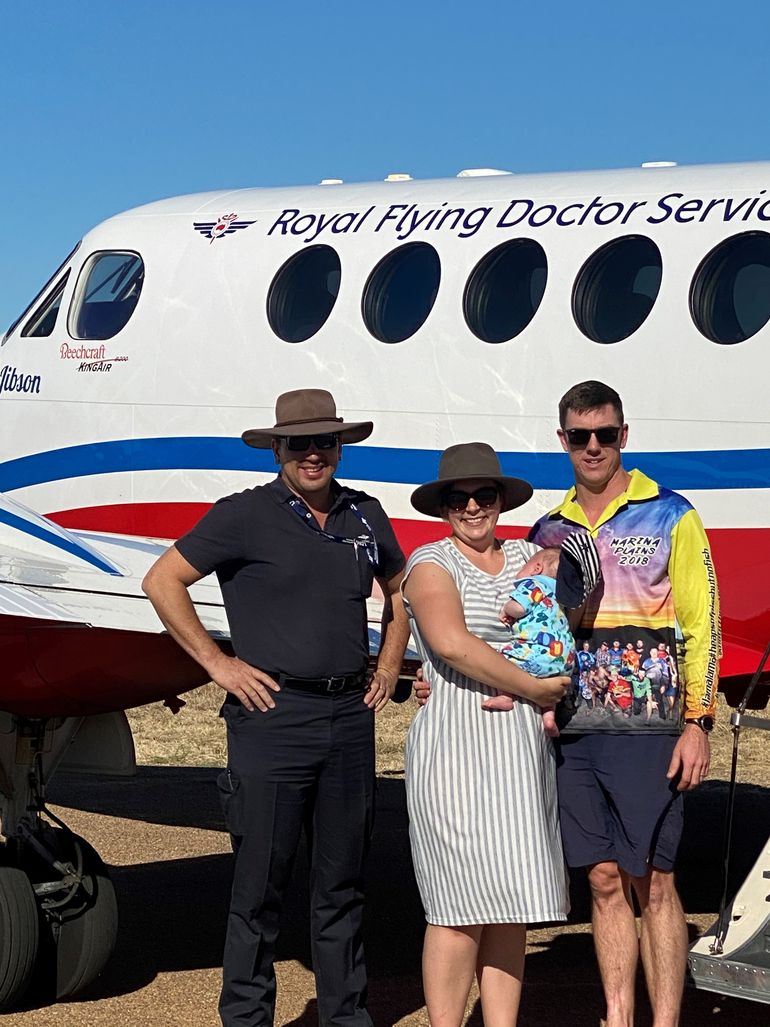 Fortunately, this aligned with Ollie’s scheduled three-month check-up in Cairns, where his cardiologist noticed Ollie’s head was quite large and ordered an immediate MRI which found there was fluid on his brain.

“We flew to Brisbane to meet with a neurosurgeon who formally diagnosed him with mild hydrocephalus (fluid on the brain),” Ebony said.

Ollie’s journey is still ongoing, and it’s of little surprise that Ebony and Joe are just looking forward to Ollie recovering and taking him home to settle.

“We're really looking forward to just life being normal for us. Which we haven't really experienced a lot of,” she said. “But I’m so grateful the way Julie and the other nurses have stayed in touch with us while we’ve been away in Brisbane. It feels like you are genuinely being cared for, because you are.”

RFDS Primary Health Care Nurse Julie Branford said working in remote communities was about building extended families, and by having a natural ability to do this made the provision of care so much easier.

“Just about every community begins to feel like your extended family. You just get to know everybody so well,” she said.

“Having a natural rapport with people is a huge part of working with the RFDS. I always try to make it a relaxed atmosphere. Even if bubba is sick, I'll have a yarn with mum and a laugh. No one likes bringing their sick baby to the clinic.

“It helps me deliver care because the parents trust me which makes it easier for them to take my advice or listen to what I have to say. I think building those friendships helps people to trust you and be accepting.

“The care you receive in rural and remote areas by the RFDS compared to the cities definitely varies because of the continuity of care. When you're working in a hospital or bigger city you just don’t get the opportunity to build those types of relationships. Going to these remote clinics, they really are part of the family in the end. You walk into the shop and people call out your name and say g’day. It's a really nice feeling.”