What is Reconciliation Week about?

Reconciliation Week is a time for all Australians to learn about our shared histories, cultures, and achievements, and to explore how each of us can contribute to achieving reconciliation in Australia.

Why are the dates of Reconciliation Week Significant?

The dates for NRW remain the same each year; 27 May to 3 June. These dates commemorate two significant milestones in the reconciliation journey— the successful 1967 referendum, and the High Court Mabo decision respectively.

3rd of June - The Mabo Desicion

3rd June is the anniversary of the 1992 landmark High Court Mabo decision, which rejected terra nullius and recognised First Nations people as traditional custodians of Australia for the first time.
When Europeans first arrived in Australia they said it was 'land belonging to no one'. The Mabo Decision legally and symbolically acknowledged the truth and changed the way we all think about Australia's history. Read more.

What is the Reconciliation Week Theme?

Each year Reconciliation Australia chooses a theme for NRW.

This year, the theme is Be Brave. Make Change.

Last year Reconciliation Australia encouraged all Australians to take action; not just in National  Reconciliation Week but every week of the year. We saw unprecedented response to our suggested actions for everyday and for braver action.
This year we are asking everyone to make change beginning with brave actions in their daily lives – where they live, work, play and socialise. 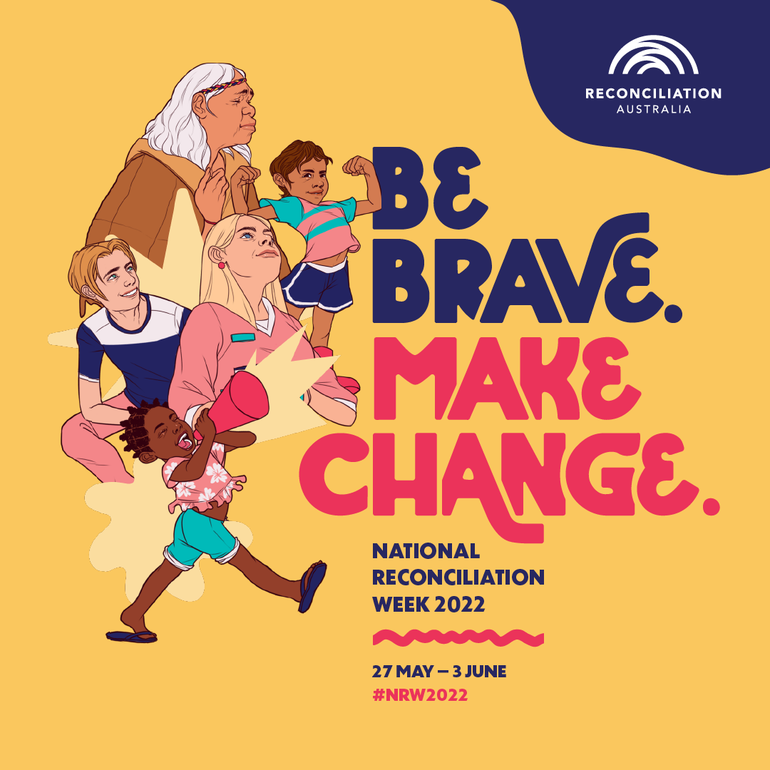 But it’s also inspiring and uplifting for all Australians and all generations as we look to make reconciliation the business of all of us.

Our collection of bold, brave characters brought to life by contemporary Torres Strait Islander illustrator, Tori-Jay Mordey shows some of the different faces of Australians working for a just and equal society.

They are a visual reminder that reconciliation is everybody’s business.

“I sought inspiration of what that kind of brave change might look like from many different people; people I know that are around me, people I see every day. And people I see living bravely every day in their own lives – from fierce little kids to older people working with more established mindsets and environments,“ Tori-Jay said.

“We can make a change. But we can’t do it alone. Be brave and start the conversation today.”

These illustrations were commissioned by Reconciliation Australia in association with Carbon Creative who advised on, and managed the 2022 theme creation and development.

Back to the Reconciliation Week Resource Hub