In a critical condition after major surgery, Garry needed a pacemaker urgently and the Flying Doctor were able to get him to hospital in time.

When Garry Braithwaite needed urgent transport to Sydney to have a pacemaker fitted, the Flying Doctor was able to answer the call and get him to the life-saving surgery he required.

After presenting to Dubbo Hospital extremely sick and with a low heart rate, he was fitted with a temporary pacemaker and a large blockage was removed from his bowel.

Garry’s daughters Jane, Melissa, Sharon and Kate had all raced to be by his side in hospital, and they were told there was no certainty their father would survive.

Despite these surgeries, Garry was still in a critical condition and needed urgent transport to Sydney. Road ambulance transport was out of the question because of Garry’s condition and ongoing thunderstorms and heavy rain made organising air evacuation difficult. 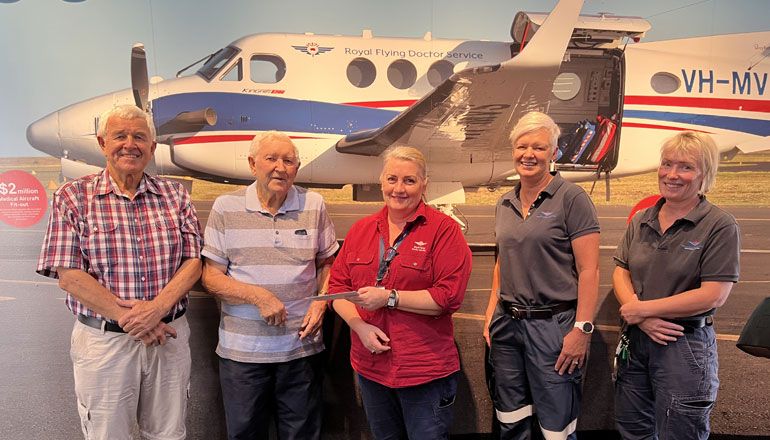 However, the weather subsided enough to make a flight possible, and the Flying Doctor was ready to get Garry to Sydney.

Jane was able to accompany her father in the plane to Sydney, while Sharon and her husband also went to the airport to see him off.

Garry’s condition meant he was heavily sedated, and he remembers nothing of the flight or those on board that helped, but his daughter Jane said they were amazed by the quality of care provided.

“The entire RFDS team were extraordinary. The care provided to Dad was exceptional in very grave circumstances. From the moment the team arrived at Dubbo Hospital ICU and introduced themselves, prepared Dad for transport it was quick, efficient and respectful to both Dad and our family.” she said.

Garry was rushed to Royal Prince Alfred (RPA) Hospital and a pacemaker was fitted. After four days of recovery, Garry was picked up by two members of the Flying Doctor team and taken to Bankstown airport and brought back to Dubbo.

“I can’t speak more highly of the Royal Flying Doctor Service and its wonderful employees. Without them I wouldn’t be here today. While I don’t remember much of my experience with them, my family have told me how amazing and professional they were,” Garry said.

“It was a distressing time for my family as it wasn’t clear if I would pull through, but the RFDS were so caring and without them I wouldn’t be here today.”

Garry has since made a kind donation to the RFDS and is a vocal supporter of the work we do.

It is thanks to the generous support of people like you and Garry that we are able to be ready for anything and can support communities with all their health needs.