Across August and September an eight-episode season of the drama ‘RFDS’ aired on Wednesday nights on Channel 7 and 7plus and it proved to be a hit with audiences across the country.

Featuring an all-star cast including Stephen Peacocke, Justine Clark, Rob Collins and Emma Hamilton, RFDS captured the unique challenges of providing medical care in remote parts of NSW. It was filmed on location at our base in Broken Hill and developed in consultation with the RFDS with regards to medical procedures, aviation-related information and other technical details. While it is a work of fiction, it was important that the narrative was true to us and our work.

The program has proved a ratings hit for Channel 7, exceeding one million viewers per episode, across live viewings and on catch-up. 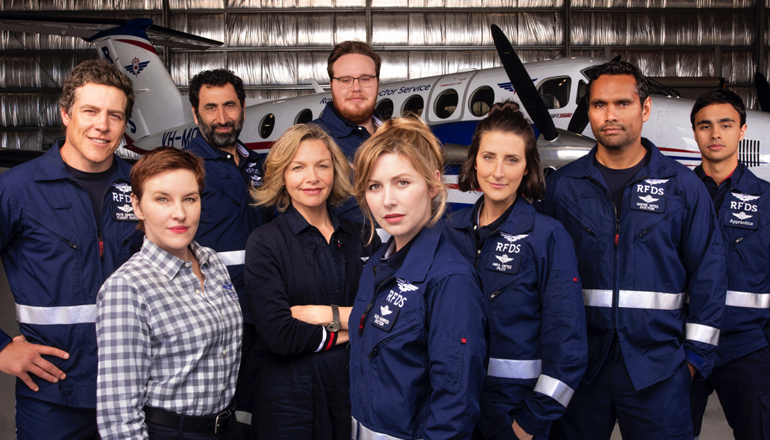 This has been great promotion for the RFDS and we have seen increased interest in our website and social media channels as a result of the show. When the original television show ‘The Flying Doctors’ ran from 1986 to 1992, it was broadcast across the globe and has been cited by many of doctors for being a significant reason for them wanting to join the service.

Given RFDS the TV show has already been acquired by broadcasters in countries including the United States, United Kingdom, New Zealand, Sweden and the Netherlands, we hope the new show can have a similar impact.

We are also waiting excitedly to hear about season two and look forward to seeing plenty more adventures from the Flying Doctor on our screens for years to come.

If you liked the RFDS outfits worn by the cast on the show and want to get the look while supporting a great cause, head to DocShop.flyingdoctor.org.au and browse our range.