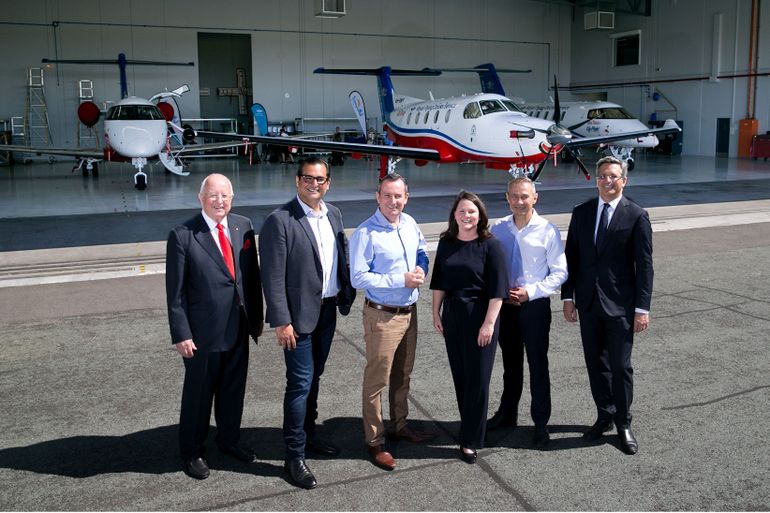 The arrival of the Royal Flying Doctor Service second PC-24 jet in WA has now made its fleet the world leader in regional aero medical services.

The bespoke Pilatus aircraft also known as ‘Kimberley’ was flown over from Switzerland by WA pilot Lisa Roper-Campbell, the first female in the Southern Hemisphere to command the PC-24 jet aircraft.

RFDS Western Operations CEO Rebecca Tomkinson said the rest of the world was now looking to WA’s next generation technology and capability, which is set to significantly improve health outcomes for those living, working and travelling in regional WA.

“Despite WA’s size and the tyranny of distance, the arrival of this jet will ensure West Australian’s can be guaranteed the best possible health outcomes, delivered no matter where they are,” she said.

“Each PC-24 Rio Tinto LifeFlight jet has been designed by West Australians for West Australians, and we can be confident of providing a ‘mantle of safety’ for mine site workers, our farmers, people living in regional and remote communities, tourists and travellers alike.

“Lotterywest and the state government’s commitment to this jet is a significant investment in the state’s wider health and emergency services infrastructure and will increase our capabilities,” Ms Tomkinson said.

‘Kimberley’ will be based in Broome to meet increased patient demand in the state’s northern and remote regions while its sister jet ‘Victory’, which arrived in December last year, is based in Perth to cover the bottom-half of the state.

The jets have the capacity to carry three stretchered patients and two medical teams each consisting of a doctor and a nurse, and can travel speeds of more than 700 kilometres per hour, halving the flight time for long-haul patient critical scenarios.

The added capability and capacity of both jets when integrated with the RFDS’ existing fleet of 16 PC-12 turboprop aircraft will boost overall fleet size and free up PC-12 resources to maintain a strong regional presence.

‘Victory’ officially entered into service on 21 January this year, and has since travelled 73,000 kilometres to reach 70 patients across the state – or 30 journeys, which is equivalent to approximately 44 flights on a PC12 aircraft.

The acquisition and aero medical fit-out of the two LifeFlight PC-24 jets is an investment of $26 million by the RFDS, partly funded by a $10 million contribution from Rio Tinto, $4.5 million from the Commonwealth Government and $6.5 million from Lotterywest.

“As we look to the future, ensuring the sustainability of our essential service is of utmost priority and we will be seeking support from the wider public to help us fund the ongoing maintenance costs of our aircraft and for the purchase of essential medical equipment and supplies.

“I would like to extend my gratitude to all West Australians for their continued support in enabling us to deliver an essential service that belongs to anyone who lives, works or travels across our great state.”