At the outbreak of the war the success of the Aerial Medical Service (later to become the RFDS), prompted the Royal Australian Air Force to establish its first air ambulance service. Former RFDS doctor Flight Lieutenant Dr George Simpson was asked to set up the Air Ambulance unit to operate in the North African Desert Campaign.

Strategic medivac from the area of operations back to permanent facilities in Australia or another allied country had not been possible before WWII when longer range aircraft became available.

By taking on the RFDS model and using its pilots to train military air crew, the Air Ambulance Unit was able to dramatically improve the way the wounded were transported to hospital from the front line.

The transportation of patients by air required 21 times fewer personnel than were required to transport the same number of patients by sea and the travel time was dramatically reduced which in turn would have saved many lives.

The Air Force No.1 Air Ambulance Unit at RAAF Laverton, Victoria, was equipped with three DH-86 Express former airliners which were fitted out for aerial ambulance work and the unit flew its first medivac mission in the Middle East on August 3, 1941.
It went on to support the British Eighth Army in its campaigns across North Africa, Sicily, Malta and Italy, evacuating 8252 patients to safety.

In its first year alone it lifted 700 wounded soldiers from the front line back to base hospitals, and one of those heroic pilots was northern Tasmanian Ern Annear, who was later recognised with the Airforce Cross for outstanding courage and distinguished service.

Ern had flown for Holymans, and then he later moved to Broken Hill to fly under contract for RFDS NSW as its first pilot before joining the RAAF in 1941.
His son David Annear, who lives in Launceston, said that his dad was in his 30s when WWII started and he joined up but was considered too old to fly combat missions, so was sent to Ballarat to train pilots.

“But when Allied troops fighting in the Middle East found that they needed air ambulance squadrons to bring home injured troops they didn't have anyone to fly the planes so next thing dad knew was that he was on a train to Fremantle and off to the Middle East," David said.

Ern’s knowledge of flying the DH-86 aircraft for the RFDS made him an invaluable instructor.

"He did drops to the Rats of Tobruk, he became Lord Mountbatten's personal pilot, and he became the staff pilot for the Allied Forces in the Middle East," David said.
Ern Annear was 45 when he finally came home to the West Tamar and met and married David's mother, 18 years his junior.

Dr Simpson, along with Dr Alan Vickers from the RFDS, later surveyed and recommended the establishment of the RFDS Tasmania Section 60 years ago.

RFDS Tasmania will celebrate the 60th anniversary of its first day of official operation on September 12.
Its first flight was out of Hobart to Queenstown on September 14, 1960 and the first flight out of Launceston was a few days to later on the 19th to Flinders Is. 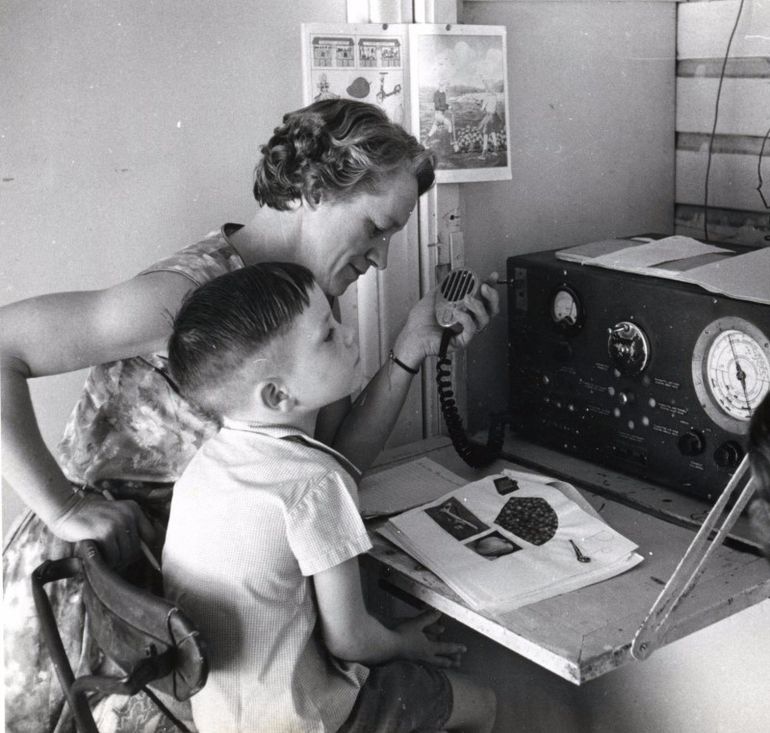 The development of long-range high frequency radio during WWII enabled the RFDS to establish the famous School of the Air program using the RFDS radio network.

In 1962 RFDS Tasmania provided the King family at Port Davey in the state’s far south west with connection to the school of the air base at Port Augusta in SA.
Many radios used during WWII were repurposed for education in remote communities.